In Economics assignments, writing styles tend to vary greatly, and there are many different forms of economics. In quantitative economics, the writing content tends to be focused on figures and equations. This writing style is discipline-specific and very direct:

Excerpt from a quantitative economics journal:

We introduce a numerical algorithm for solving dynamic economic models that merges stochastic simulation and projection approaches: we use simulation to approximate the ergodic measure of the solution, we cover the support of the constructed ergodic measure with a fixed grid, and we use projection techniques to accurately solve the model on that grid. The construction of the grid is the key novel piece of our analysis: we replace a large cloud of simulated points with a small set of “representative” points. We present three alternative techniques for constructing representative points: a clustering method, an ε-distinguishable set method, and a locally-adaptive variant of the ε-distinguishable set method. As an illustration, we solve one- and multi-agent neoclassical growth models and a large-scale new Keynesian model with a zero lower bound on nominal interest rates. The proposed solution algorithm is tractable in problems with high dimensionality (hundreds of state variables) on a desktop computer.

In economics, writing can also conform to a more traditional academic style which incorporates frequent use of references to support points.

The Australian welfare state is often seen as representing an ideal compromise: small but effective. Unlike some of the effective, but larger, European welfare states, it does not overwhelm public finances, but unlike the low-taxing American welfare state, it provides genuinely egalitarian benefits. It somehow represents the best of both worlds and it does so by targeting its redistributive effort at those most in need (Whiteford and Angenent 2002; Whiteford 2010; Alexander 2010–11; Hartcher 2011). Public opinion research shows that this Australian welfare system of ‘low-tax egalitarianism’ (Alexander 2010–11) has strong public support (Wilson, Spies-Butcher and Stebbing 2009). There are those, however, who think that the once-fit Australian welfare state has become flabby. It has suffered a form of ‘middle-aged spread’, a bulge around the middle. Whether or not it has grown or shrunken overall, the welfare state has lost some of its redistributive oomph. While agreeing on this analysis of the trends, these critics are motivated by very different priorities. From the Left, some object on equity grounds that ‘middle-class welfare’ detracts from the system’s redistributive force. They would reduce middle-class welfare so that redistribution can focus more on what they take to be the truly disadvantaged: age pensioners; sole parents; low income workers; the unemployed; and those with a disability (Hamilton, Downie and Lu 2007; Megalogenis 2008; Gittins 2009, 2010)

The following graph shows changes in chocolate consumption in Australian adults between 1970 and 2009. 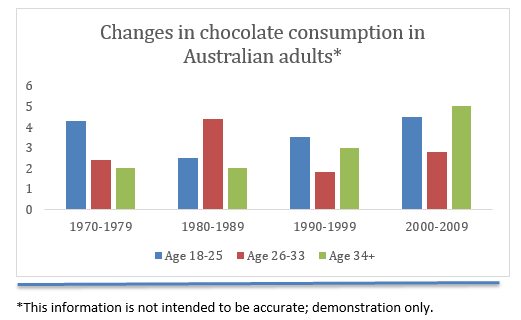 If you were asked to describe this bar-chart, you would probably be expected to describe the changes in chocolate consumption levels for each age-group from 1970 to 2009.

Here is some useful vocabulary for describing some changes in bar-charts, graphs & tables.

Example: “Chocolate consumption among adults aged 35 and over remained stable between 1970 and 1989, but increased dramatically between 1999 and 2009”.

Adapted from: Describing charts and graphs. Retrieved from  http://oppematerjal.sisekaitse.ee/eppleibur/describing_graphs/

The following tips for writing well in economics come from Greg Mankiw’s blog. He is an Economics Professor at Harvard University

How to write well:

The Marking Criteria for each assignment is usually found in your Subject Learning Guide. It’s really helpful to read this and use it to guide your writing in Economics assignments, as the lecturers & tutors use it to allocate marks to your assignment. 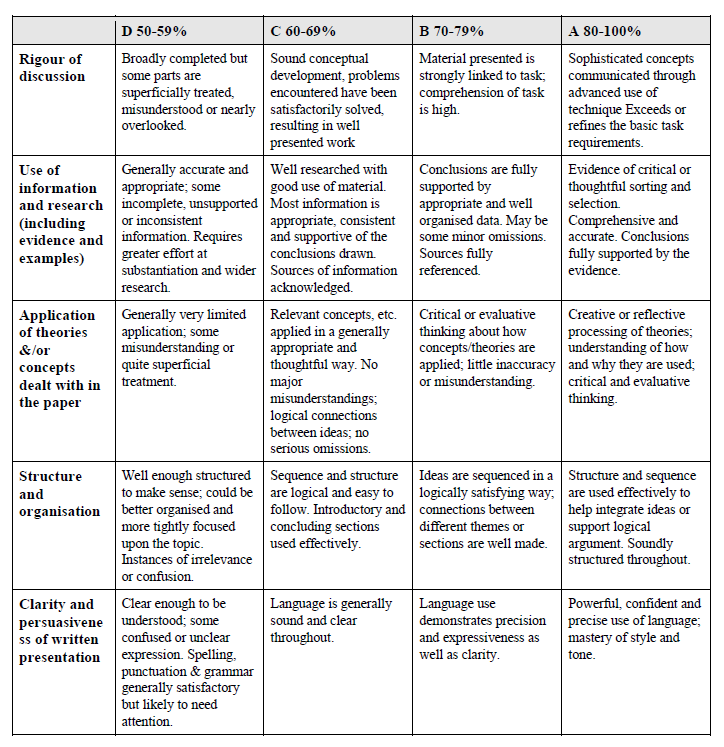 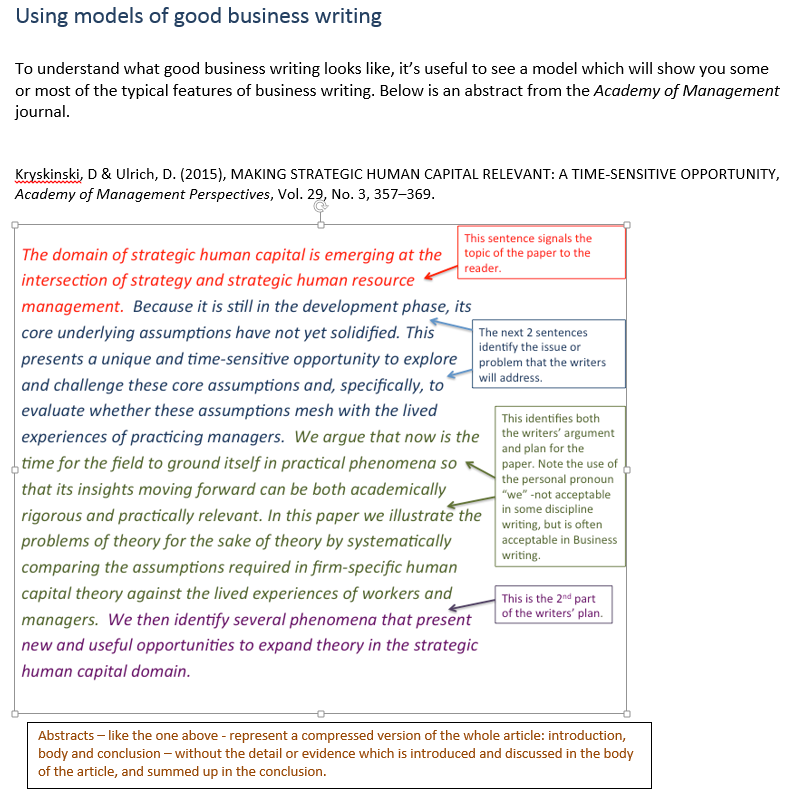 To read this paragraph in an alternative format, see below:

The domain of strategic human capital is emerging at the intersection of strategy and strategic human resource management (1). Because it is still in the development phase, its core underlying assumptions have not yet solidified. This presents a unique and time-sensitive opportunity to explore and challenge these core assumptions and, specifically, to evaluate whether these assumptions mesh with the lived experiences of practising managers (2). We argue that now is the time for the field to ground itself in practical phenomena so that its insights moving forward can be both academically rigorous and practically relevant (3). In this paper we illustrate the problems of theory for the sake of theory by systematically comparing the assumptions required in firm-specific human capital theory against the lived experience of workers and managers.  We then identify several phenomena that present new and useful opportunities to expand theory in the strategic human capital domain (4).

Abstracts - like the one above - represent a compressed version of the whole article: introduction, body and conclusion - without the detail or evidence which is introduced and discussed in the body of the article and summed up in the conclusion.

Which of the following points is INCORRECT when describing good Business writing? Click on each point to see the answers.

Correct. Most assignments in Business require some level of critical analysis; for example, you are able to comment on or compare different authors’ arguments or points of view.

cites evidence from reliable sources to support your argument

Correct. Your argument should usually be supported by pointing to some published literature – often a journal article or scholarly text, as these are considered most reliable.

uses a mixture of direct quotes, paraphrase, your comments, opinions and discussion

Correct. However, direct quotes should be used sparingly; don't copy and paste large chunks from the source, even with a citation. It's best to write mostly in your own words, supported by your evidence from the literature.

Incorrect. The longer a sentence is, the less coherent it is – so it's a good idea to aim for shorter sentences with precise and accurate use of words. (Using long words and sentences doesn't make you look 'academic')

Correct. Clear paragraphs make your writing more readable, as they break the ideas into smaller 'chunks' (like eating a piece of cake, smaller bites are easier to digest).

links ideas and paragraphs together logically

Correct. Good writing takes the reader on a journey, where all the parts follow on logically from each other. Often your essay/report structure will look like this:

Incorrect. Increasingly, writing in business requires a direct style and this often means using the 1st person (‘I’, ‘we’). For example, it is quite acceptable to see a journal article which uses sentences like, “We found that …etc.”, However, it is usually best to check with the subject learning guide or your tutor as to whether active or passive voice is acceptable.

contains a clear argument or point of view

Correct. Most writing at university is argumentative or critical - that is it goes beyond description and includes some evaluation.

includes an introduction, a body and a conclusion

Correct. No matter how short your writing assignment is, it still requires you to introduce the idea to the reader, discuss and argue it in the body, and to sum it up in the conclusion.